Paul Jefferson, one of the earliest humanitarian deminers said “a landmine is the perfect soldier: Ever courageous, never sleeps, never misses”. The simplicity and cost-effectiveness of mines are major factors in explaining the widespread use of mines throughout the numerous countries that are now faced with dealing with the mine contamination problem.

Detection and removal of antipersonnel landmines is, at the present time, a serious problem of political, economical, environmental and humanitarian dimension. As this map shows, there is still a long way to go before the world is free of anti-personnel landmines. 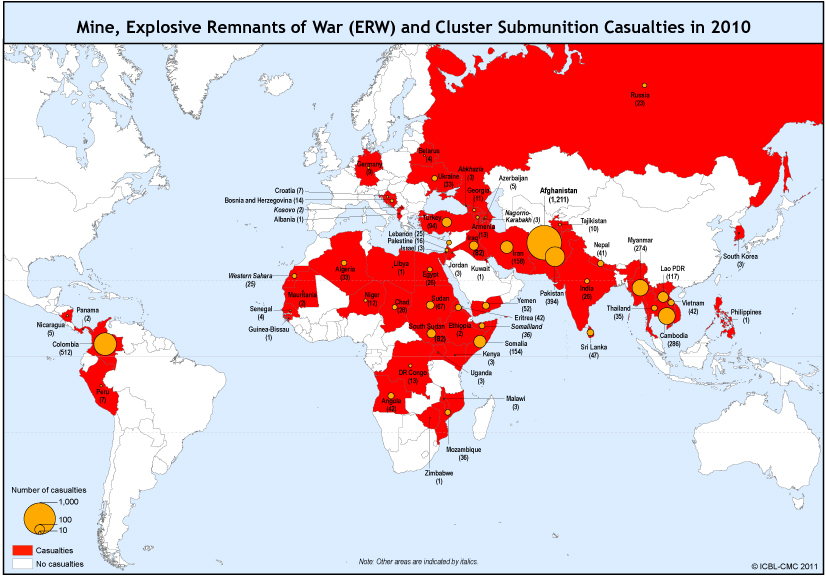 The following facts reflect the seriousness of this problem:

Egypt as a Case Study

Egypt has been listed as the country most contaminated by landmines in the world with an estimate of approximately 23,000,000 landmines. Egypt is also considered as the fifth country with the most antipersonnel landmine per square mile. This serious problem hinders economic development of rich areas in the north coast and red sea.

The area of north coast was contaminated as a result of hostilities between 1940 and 1943 involving Britain and its allies (including Egyptian forces) fighting German and Italian forces for control of North Africa. The areas to the east, including the Sinai Peninsula were contaminated between 1956 and 1973 due to hostilities between Egypt and Israel. These rich areas represent 22% of the total surface of Egypt. Development projects in these areas are significantly constrained by mine and UXO contamination and the civilian casualty rate seems high in proportion to the populations in these areas. The contaminated areas enjoy great oil and mineral wealth such as petroleum and Natural Gas. The problems of landmines lead to the contribution of the North Coast to 14% only of the total oil and natural gas production in Egypt.

Moreover, in Egypt agriculture is one of the mainstays of the economy. Landmines are planted in fields, around wells, water sources, and hydroelectric installations, making these lands unusable or usable only at great risk. Egypt could increment its agricultural production if landmines were eliminated from the contaminated regions. The mines in a wide coastal strip, all the way to the Libyan border (and beyond), nearby coastal regions of Suez Canal Zone such as salt lakes and Red Sea coast prevent use of hundreds of thousands of sq. km. of agricultural land, prevent travel on thousands of km. of roads and deny access to potable water. These facts reflect the level of seriousness of landmines in Egypt. The contaminated areas in the North Coast, Gulf of Suez and Red Sea coasts are now being reclaimed for economic development making mine clearance an urgent priority for the Egyptian government.

The landmine and unexploded ordnance (UXO) problems in Egypt are unique due to the following facts: